Well, it’s happened. Giulietta #1 is finally home from Oregon and done, almost. A few adjustments is all she needs now.

Is restoring a little better than re-cycling? Hmm ….. more expensive and more rewarding certainly. At least all the carbon that was released to create it 60 years ago didn’t just get crushed because it was a used up sports car. Restoration certainly is not carbon capture, but for cars this desirable it is up-cycling.

She came off the truck on empty last Sunday, the 5th of May. Even before parking her in the garage next to Giulietta #2, I drove her to the Shell station. I really liked her enthusiasm. It was wonderful to finally feel the little jewel of an engine I built (all 100+ hp from 85 cubic inches). All right hand turns and curves the first mile or so were pure joy. Then a left hander from a traffic light embarrassed her and shook me up. Her passenger door flew wide open! Then at the Shell station the trunk key could only just barely turn the latch. Nervous energy made me pull hard. It opened. Only then could I put some premium in her tank.

There was another annoyance. Her first and second gears are where my right leg needs to be. So before the next drive I’ll also have to find a creative fix for that under the rubber boot on top of her old-school, tunnel-case transmission.

A Cold Day in Hell, Michigan

One week later, now actually, it’s Mother’s Day, 2019. Yesterday I drove instead our ol’ reliable, comfy, frisky and glamorous E-type Coupe on the Detroit Alfa Romeo Owners Club’s annual “Drive to Hell and Back.” For over twenty years our local AROC has known me as a lapsed Alfa driver (I used to drive a GTV) and slow re-assembler of Alfa parts. So one more time without an Alfa was no big deal for me or them. Also it was one of those really cold days in Hell (50 degrees F or 10 C tops). Naturally the Jag and I had fun tagging along, playing with a handful of modern Alfa  4C sports cars, then chasing a dozen older Alfas, all a little younger than my Jag. It is amazing how modern, spirited, warm and still beautiful our 1965 E-Type Jaguar Coupe is, even today.

Our up-county roads to Livingston County were fun to drive thanks to David and Andrea Hammond’s annual event planning. The morning for me started out pleasant, at a civil hour, socializing in and around Ann Arbor’s Alfa Romeo and Fiat showroom where their Suburban Collection staff welcomed us with a continental breakfast and two baristas who worked an Italian steamer. It ended, almost, in a cozy Italian restaurant in Pinckney with good northern Italian fare and two unusually pleasant young waitresses — one even claimed Italian heritage when she learned the atypical cars outside are ours.

I’ll stick with “almost” because I experienced a sad coda for classic car enthusiasts. I could have recorded it with my phone, if I was the passenger. Anyway, trust me, here’s the scene: Just about back home, I closed in on a lot of chrome attached to a huge bright white 1965 Chrysler Imperial with a spare tire embossed on the trunk, top down, one man driving, no hair visible, but wearing a black beret. Watching him steer his land yacht through three roundabouts in succession, like Popeye, perfectly illustrated for me our folly and the incredible sweet spot in earth history our generation has enjoyed. Of course, some of us made more enlightened decisions about the old cars we still covet. If I had one of those I wouldn’t be able to resist painting that faux spare tire to look like a rescue ring.

The expression “que sera sera” is a good and useful Italian attitude. Thank you Doris Day, RIP. Yes we enjoyed our stays at your Cypress Inn in Carmel-by-the-Sea and your stack of dog beds at registration for canine guests.

These new and old memories leave me with a feeling of remorse for the two young waitresses and their loved ones not yet born. We lived in a world of dreams, real accomplishments and delusions, and didn’t know how lucky we were. Only old comic books or sitcoms can describe our capacity for fantasy and fun back then. Their kids and surely their grand kids dystopian realities of mass migrations from the coasts and extinctions that we should and could have anticipated won’t be fun at all.

Mothers, you’ll never have a carbon neutral baby. And next year is the 50th anniversary of the first Earth Day, inaugurated when I transferred from aerospace to geology at the University of Michigan, still subject to the draft, and protesting the war in Vietnam. April 22, 2020 is not that many weeks from now. In my lifetime evolution and continental drift were accepted as scientific fact. And now I find myself in the only country on earth where just enough stupid people in economic decline elected a president who is a stubborn climate change denier! This is so embarrassing I may yet ask to have my German citizenship reinstated.

Now I’m finishing the book Moneyland by Oliver Bullough — celebrated as The Economist’s Book of the Year. The major take-away so far is: over the last 30 years, as much as 20 percent of the world’s GNP has been hidden for oligarchs, kleptocrats, weapons and drug runners, etc. in shell corporations by bankers, lawyers and government officials. This too is a disaster about to create unimaginable chaos.

Indeed, my lifetime appears to have been a very sweet spot, a lucky time on earth right after two nuclear bombs ended a huge war of civilizations. It didn’t dawn on me until George W. Bush got in office that we’re all driving back to hell via unregulated capitalism after Atlas Shrugged. Still there is hope. We stopped the war in Vietnam when we were young. Today’s youth is just as smart and resourceful, only different. We were that too. 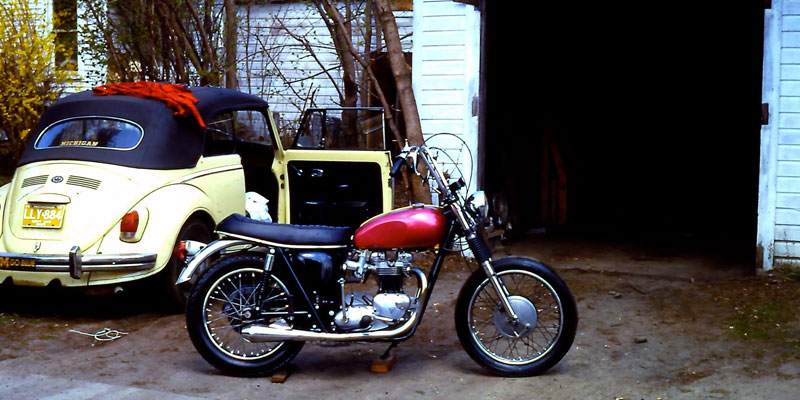 This photo is from the dawn of my mechanical hobby (off campus in Ann Arbor in 1970) and less than a mile from where I live now. This is proof that I have lived that sweet spot. The soundtrack then: I could hear the MC5 practicing a block away. Those megaphones were as loud as their speakers but also very effective!

My blogs are about classic car events and road trips and include general and sometimes irreverent commentary about buying, owning, restoring, and driving classic cars.