Here’s an excellent snapshot of our supply chain problem. Not only is its fragility responsible for an unmanageable part of inflation, just-in-time optimization has spoiled investors and consumers. Impulsive behavior is rewarded but it also crashes the system.

Another casualty are we, who used to enjoy driving our cars. There is no lane discipline, trucks are everywhere! Driving a classic in that traffic is like marching in a military parade wearing a speedo or a bikini.

Are we the modern equestrians? My options for driving a classic car have shrunk to regional tours on secondary roads or shipping it to an event way out of State. Keeping a trailer, and something to tow it, was not a pleasure and rarely a necessity, certainly not worth the cost and hassle. But friends who will loan or rent their fifth wheel rig are precious!

The next day, I read this by David Brooks, columnist, New York Times:

America is Falling Apart at the Seams

“In June a statistic floated across my desk that startled me. In 2020, the number of miles Americans drove fell 13% because of the pandemic, but the number of traffic deaths rose 7%. I couldn’t figure out why. Are Americans driving so much more recklessly? Then in the first half of 2021, according to the national Highway Safety Traffic Administration, motor vehicle deaths were up 18.4% even over 2020. Contributing factors, according to the agency, include driving under the influence, speeding and failure to wear a seatbelt.” I could say, anger, and nobody’s around to stop me, are the real reasons.

David has an uncanny ability to conclude his opinion with a statement that is like a T intersection right after a fantastic curve. Today, for the first time I can remember, he took me to a dead end, after citing a litany of more recent evidence for our social breakdown: “All kinds of bad behavior is on the rise” such as altercations on airplanes, murder, overdose, drinking, and abuse of healthcare professionals. I would also like to mention low EMT staffing, slow response time, and anti-vaxxers. Anyway, David’s parting words shocked me: “As a columnist, I’m supposed to have some answers. But I just don’t right now. I just know the situation is dire.”

The Light at the End of This Pandemic

OK, we’ve barely passed the darkest day of the year around here. Next installment, I’ll be driving us towards dawn. I think I’ve located Alfie’s reason for wheezing. I’m hopeful, it seems to be external, but of course in an impossible to reach place with normal tools around the old-school DCO3 Webers.

At least the Jag is running like new and improved. It had a good run before curling up for winter. 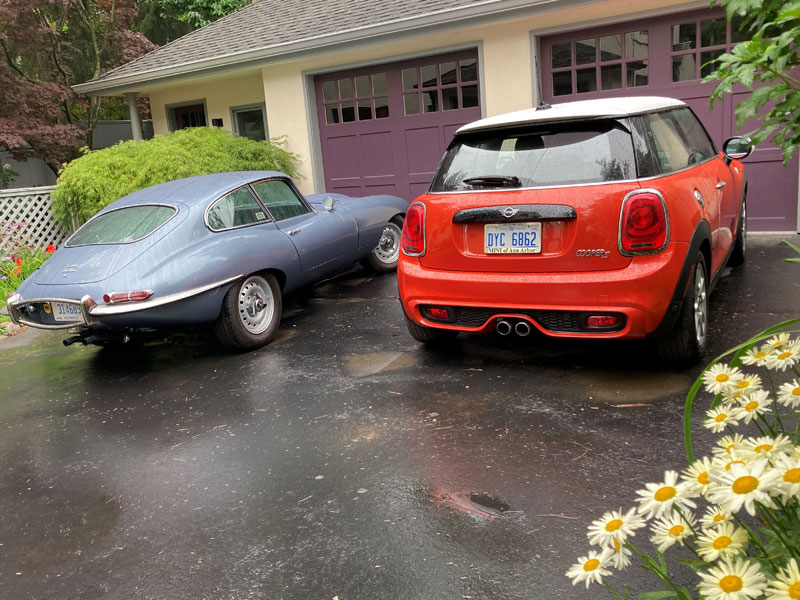 And the Corvair is finally reunited with its original engine, but still is not done.

This means that I can actually focus mostly on finishing Giulietta. Replacing her glass, making her gauges function accurately and her doors latch plus seal like a new car will keep me challenged and distracted from the real world.

Stay tuned for reports on small meet-ups and my renewed effort at instigating some adventurous driving with a few interesting cars.
After all, that’s why I am doing this.

Ah, the good old days, when a classic sports car could also prove the driver’s mettle just getting there on roads that don’t get salted. Stay tuned for the rest of that story. Teaser — there were big horn sheep on the shoulder. It was hunting season.

My blogs are about classic car events and road trips and include general and sometimes irreverent commentary about buying, owning, restoring, and driving classic cars.